SikhPolis are delighted to announce the unveiling of a commemorative bronze, Sikh statue in Gravesend, Kent, to honour the thousands of Sikhs who formed the largest volunteer army in history during both World War I and II, and who bravely fought for justice and freedom which is still enjoyed in the West today.

Some years ago SikhPolis’s director, Palbinder Singh, came up with the idea of creating a military memorial for Sikhs who fought for Britain’s freedom during World War I and II. “Despite the massive contribution Sikhs made fighting alongside British soldiers, it seemed as though they had been written out of history. I wanted there to be some recognition and felt that a statue would be fitting”, he said.

In 2008, Conservative MP, Adam Holloway, opened a new literary section within Gravesend Library, entitled ‘English Books On Sikhism’, which provides a valuable source of information regarding Sikhs to Kent libraries. It was at this event that SikhPolis’s commemorative statue project was first announced.

Since then, SikhPolis and Mr Holloway progressed the project, later receiving the support of the then leader of Gravesham Council, the late Mike Snelling. Site visits were conducted and Defence personnel consulted, including the British Legion and Lord Slim, the son of Viscount Slim who led many Sikh and Gurkha regiments during the World Wars. Extensive research of Anglo-Sikh military history was also conducted.

Initially it was decided that the statue should be sculpted in the likeness of Nand Singh, a Sikh soldier who fought in World War II and was awarded the Victoria Cross. The team recruited the internationally acclaimed sculptor, Les Johnson, who generously worked on the design pro bono.

However, after the death of local war hero, Squadron Leader Mahinder Singh Pujji DFC, in 2010, who served in World War II, and who lived and died in Gravesend, it was suggested, by Mr Holloway, that Squadron Leader Pujji would make a more fitting representative. Sculptor, Les Johnson, kindly started designing again from scratch to capture the character and likeness of Pujji.

The team wished to give the Sikh community of Gravesend the opportunity to be involved in this initiative and, therefore, approached the Sikh Mayor of Gravesham, Tanmanjeet Dhesi, for support in 2012. Mr Dhesi facilitated the generation of funds from the Sikh community. As a result of this, the local Labour council planned a launch of SikhPolis’s project, and subsequently set up a committee. 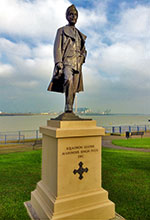 Sikhs have an obligation to challenge lapses in integrity and displays of self-interest. It is with this commitment to Guru Nanak’s political teachings that SikhPolis feel it necessary to highlight various incidents that led to the apparent marginalization of SikhPolis, by the council’s committee, from their own project, for reasons unknown. Notification of committee meetings were not received by the original project team; meeting minutes regarding the tender process were requested, but never produced; a request for transparency of donation details regarding community funding was denied; and finally the sculptor, Les Johnson, who dedicated his time and effort for free during the initial years, was removed.

Despite these issues, SikhPolis is delighted to have pioneered the first Sikh military statue in Great Britain to recognise the extraordinary contribution of Sikhs during World Wars I and II. We would encourage others to continue pioneering projects that acknowledge the courage and valour of those that made the ultimate sacrifice so we could live freely today.